You could say that Staffan Öberg Nonet is a fairly new band. Today’s lineup has played together a couple of years and some a few years more as an octet. On the other hand, the core members have played together more than 60 years! And that is important for understanding the spirit of the band. Staffan Öberg and Lars-Göran Ulander met at the Umeå High School that today is converted into the world famous Guitars Museum. A little bit of an irony in there or at least a history to be learned.

In the mid-fifties “Jazz” ruled, or at least, that´s what Staffan and Lars-Göran felt and believed. Electric guitars were, if not a joke, just another instrument almost nothing to take seriously. Miles Davis, Charles Mingus, Sonny Rollins, John Coltrane and later Ornette Coleman were strong antidotes against the influence of rock and roll. The question of who was the best: Elvis Presley or Tommy Steele was considered ludicrous. The event horizon was modern jazz and the history with Louis Armstrong, Duke Ellington, Count Basie as a strong heritage and foundation.

When they met Staffan had a band that lacked a bass player and Lars-Göran a band without a drummer. They competed at school dances for a while until they joined forces. They took classes in musical theory for pianist Berndt Egerbladh and were especially intrigued by what he had to say about tones foreign to the chords. The Staffan Öberg Nonet in retrospect started as a seven piece Arne Domnerus type dance band led by pianist Stig Söderberg and were joined by trumpeter Eilert Thulin. Not only a Bengt-Arne Wallin look-alike but also gifted as arranger. They had to apply for a special permit to play dancehalls since they were underaged. The mission was to save the dance audience by playing ”state of the art modern jazz”. The photo shows the band at a gig around 1958 or 1959 with the lineup Kjell-Arne Danemo (bs), Lars-Göran (as), Staffan (ts), Eilert (trp), Stig (pi), Per-Erik Persson (b) and Sten Öberg (dr). 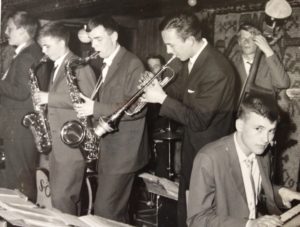 Even if they had some impact the idea of course was a little too hardcore or even punkish to work. But it was a great school. At times the audience actually had it. Like at a youth center concert as supporting act to Rock-Lage, Umeå´s then big rock star. Thelonious Monk’s ”Misterioso” was too much for one of the fans who actually stormed the stage removing Stig Söderberg from the piano. In Björna on a New Year’s Eve dance a similar thing happened when Lars-Göran started to improvise over the tango “Du svarte zigenare”. A furious aficionado actually made full charge on the stage about a meter above the dancefloor to seize the bass player pulling him down to the floor. The young jazz crusaders calmed it down by playing a few Italian scores and a few cha-chas. From enlightenment to consumer satisfaction in a split second. It was the dawning of a new age. Trio med Bumba, Sven-Ingvar´s and beyond; it was time to think about the future not only because other dance bands started pulling members’ sleeves. It was time to disband.

In the early 60s the idea of surviving as a jazz musician in Sweden simply was not an option. Not even if you moved to Stockholm. Staffan eventually did just that but to study social science. Eilert for a while played in other bands before he made up his mind to get his engineering degree at Chalmers Institute of Technology in Gothenburg followed by work for SIDA in Kenya. In 1963 Lars-Göran got an offer he could not resist. Working as a trainee at the Road Administration he became a member of the Lars Lystedt Sextet/Quintet. By pure luck he moved to Saxnäs in South Lapland to work as a teacher.

The time for reunion came in the mid 70s. Thor Egerbladh´s Octet was the catalyst also through bringing Staffan and his older brother Sten Öberg together in the same band. But what really sparked it was a concert celebrating the 50th anniversary of Lars Gullin – posthumously. Lars Gullin was the household god in the Öberg family. The repertoire was no problem; Staffan had stored all the Gullin originals from the 50s.  The concert at the museum was a success and the start of the Sten Öberg Gullin Group. It hasn´t disbanded yet. In fact it also gave birth to the Staffan Öberg Mingus Septet/Octet leading up to today’s Staffan Öberg Nonet.

Over the years a number of musicians have played either as permanent members or substitutes in the different constellations including the Sten Öberg Gullin group and Staffan Öberg Septet/Octet/Nonet.